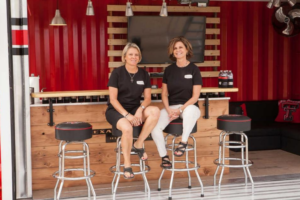 If you build, will they come? More specifically, if two women almost simultaneously get the idea, then design it, hire a manufacturer and market their invention, will sports fans in turn socialize, grill, drink and watch flat-screen televisions, all in a unique way?

“The response has been unbelievable,” said Jane’t Howey. “It’s been nuts really.”

Howey and Sheryl Estes, two women with a history of entrepreneurial ideas and Texas Panhandle ties, developed an idea in the fall, enlisted one of two manufacturers in the unlikely town of Memphis and – voila! – boxGATE just might be the future of the popular sports venue pastime of tailgating.

“It takes tailgating to a whole new level,” Estes said. “This is a box where you basically show up, unlock it and in five minutes, start grilling steaks in a prime location near a football stadium.”

Estes, a native of Mobeetie, played basketball at West Texas A&M and was head coach of the Wayland Baptist Flying Queens from 1989 to 1996. Howey is the wife of Midland ISD athletic director Todd Howey. From 1999 to 2008, she lived in Canyon when Todd was athletic director of Canyon ISD.

Friends since they shared a year together at Texas Tech, they formed their business partnership, boxLIFE, almost accidentally. Estes, who lives in Corpus Christi, went to Midland on a business trip last fall and stayed with the Howeys because of a lack of hotel rooms.

“She mentioned to Todd about the shipping containers and doing apartments and oilfield housing out of them, and he told her she needed to talk to me,” Howey said.

What are these odds – unknown to either, both had been researching the use of repurposed shipping containers, which are in large supply. Estes had ideas of temporary oilfield housing and beach accommodations, and Howey had an eye on an urban trailer park.

“When I talked to people about shipping containers, they looked at me like I had two heads,” Estes said. “It was unusual, to say the least, to have the same interests. So, we immediately shared our ideas, and one thing led to another.”

By November, that one thing, that main thing, was boxGATE, a division of their new company, boxLIFE. Howey got the idea of repurposed shipping containers for tailgating. To them, it made the best sense to combine their background in athletics with client contacts.

And it didn’t hurt in the slightest that tailgating has exploded, particularly in college and pro football, but also in NASCAR and soccer. The Tailgating Industry Association estimates it’s a $20 billion industry, and that’s just for football.

“When Cheryl and I were in college, we just went to the game,” Howey said. “Now it’s an all-day event. They’re like family reunions.”

They sketched an idea for a fold-out tailgate on notebook paper that belonged to Howey’s son. Wiley Davis, construction supervisor of Dason Construction in Memphis, took it from there. The result: A fold-out tailgating venue that includes a bar, refrigerator, sink, keg tap, grill, fold down table, awning, two flatscreen TVs, leather sofa and an 8-foot-by-20-foot viewing deck at the top – all with a school logo.

The business model is to partner with universities or other sports entities and lease the tailgate units by the game or season.

“Universities have not really been capitalizing on the revenue that’s out there with tailgating,” Estes said. “We give them an instant revenue stream. We provide boxGATE at no cost, and we negotiate a split with the university. Basically, they provide the real estate, we provide the unit, and we split the proceeds.”

They think a market exists among sports fans who can’t make the financial commitment for specialized RVs and redesigned vehicles that are the staple of tailgating.

Davis, whose company has built 11 of the boxGATES, had his doubts about the level of interest until the units were unveiled April 5 when Texas Tech had a spring football practice in Midland, and then again at Tech’s spring game in Lubbock on April 12.

“The enthusiasm we encountered at both Midland and Lubbock, I couldn’t believe it,” he said. “People just went crazy over them. I thought, ‘Wow, what have I got myself into?’”

Indeed, since the public launch three weeks ago, response has exceeded what both woman had hoped. The reach of social media, they said, has been huge. The boxGATE will be at UT-San Antonio’s spring game on Saturday.

They have been in discussion with universities, three NASCAR tracks, and an NBA and NFL team. They’ve been hiring, Howey said, “right and left.”

They anticipate partnerships this fall with five colleges, several businesses, NASCAR as well as one NFL and NBA team. Davis can get his operation streamlined to where 10 employees could build them in an assembly line.

“We get bored easily,” Howey said, “but be careful what you ask for.”

One of the tell-tale signs that an idea might fit a niche is when people slap their forehead and say, “Why didn’t I think of that?”

Jon Mark Beilue is an AGN Media columnist. He can be reached at jon.beilue@amarillo.com or 806-345-3318. His blog and video blog appear on amarillo.com. Follow him on Twitter: @jonmarkbeilue.

You can find the article here: https://www.amarillo.com/news/local-news/2014-04-24/beilue-women-take-tailgating-whole-new-level