boxSUITESTM is boxLIFE’s premier model of shipping containers providing the ultimate fan experience on the field.

boxLIFE is proud to announce the creation of boxSUITESTM. Your fans will be able to enjoy the game live and up close from the best seat in the house in a luxury environment at the heart of the action. Imagine your fans being able to tailgate inside the stadium and stay for the game.

boxSUITESTM provides an additional revenue stream to the athletic department or sports organization. This is a win-win for you and for your fans boosting revenue and fan experience.

boxSUITESTM can be used at multiple different athletic venues for various sports including football, soccer, baseball, softball, or other. boxSUITESTM offers the perfect solution for those seeking an elevated V.I.P. experience on the field.

If you have space in the end zone, on the sidelines, or on your concourse — boxSUITESTM offers the ideal opportunity to: 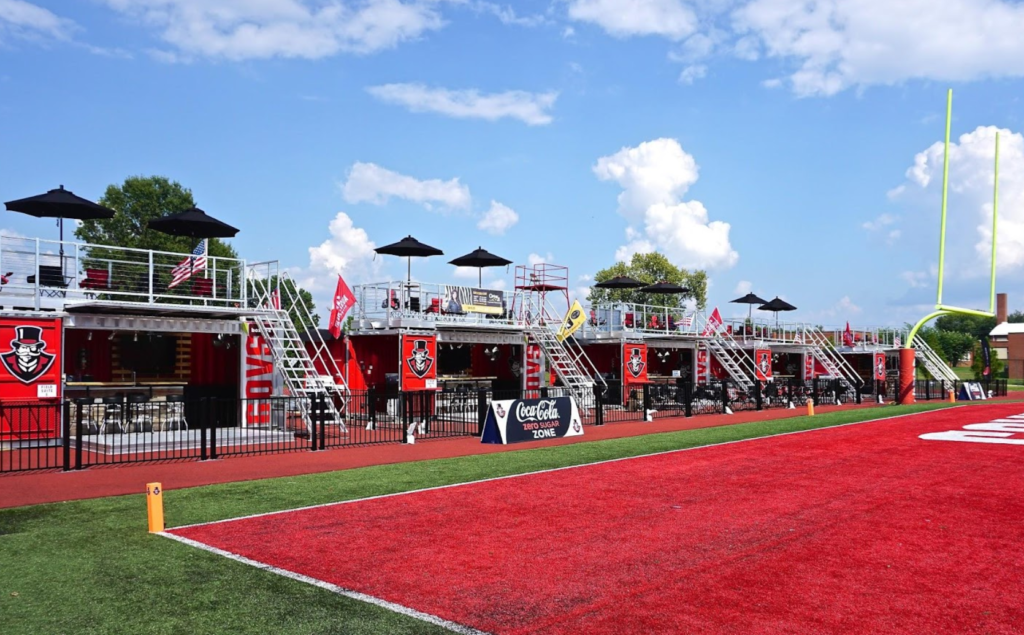 Austin Peay State University purchased five boxSUITESTM in the spring of 2017. They chose the fully branded Gold model at $50,000.  They pre-sold the units using a rendering and one of the boxes that was delivered in the summer. Their goal was to offer unique fan experience while creating a home field advantage. The selling point was the ability to tailgate prior to the game and be on the field for the game. Their target market was 35-45 year olds who normally do not purchase traditional suites. Four of the suites were sold prior to delivery.

They contracted with a local towing company after the football season to move the containers to another location.  They moved 3 to the baseball field and stored the other 2 for lack of space. They leased them for the season for $5000. One of the suites was used for per game or series leases for $500-$1000 per event.

In 2018, the suites were leased again for $12,000 for a single football season followed by baseball at $5000.  In 2019, they are moving into multi-year leases. For a 5 year lease, the price is $15,000 per season for football. The baseball lease will remain the same. Austin Peay believes if they had more room in the football stadium, they could sell more boxSUITES.

The athletic department borrowed the money from the Alumni Foundation on a 0% note over five years.  They will pay $50,000 back per season and retain the additional revenue.

If you want the best fan experience on the field, request a quote today to get started!